Life and Fate by Vasily Grossman is probably the best WWII novel ever written, is a strong candidate for greatest war novel ever written, and shouldn't be left out of any discussion about the greatest novel every written. The reason you've never read it, is that Grossman's manuscript and the typewriter ribbon he composed it on were seized by the Soviet authorities and it has only recently become available in and now the . This massive novel follows a number of characters living in different circumstances and with different perspectives on the fascist Soviet Union and the war against Germany. The characters include Victor Shtrum, a theoretical physicist with a conscience; Captain Grekov, a commander of a small hold out in Stalingrad; Pavlovich Novikov, a dynamic tank commander; and Nikolay Krymov, a member of the political branch of the military whose job is to ensure that proper communist philosophy is being practiced by soldiers and officials. There are also historical characters like the German General Friedrich Paulus and the Soviet Lieutenant-General Yeremenko. The story moves from the streets of Stalingrad, to , to the eastern edge of European Russia beyond the reach of the German invasion, all the way to concentration camps and gas champers.

Life and Fate concerns itself with many questions, but the two that stand out to me are: how can fascism exist? and how did hold?

One of the mysteries of the twentieth century is the rise of fascism around the world, how absolutists were able to come to power and control their populations. Of course, some people believed in the extreme doctrines and many others were cowed into obedience through state sponsored terror, but Grossman shows that, especially in the early stages of these regimes, convenience was a powerful pacifier. Simply put it was much more convenient to get sugar, bread, soap, clothes, jobs, housing, etc if you played by the party rules. "The people" of these societies weren't apathetic or selfish, they were struggling to support their families and chose the path of least resistance. The decisions that allowed fascist governments to establish themselves were inherently apolitical.

Before Stalingrad, the Nazi army had been eradicating the Soviets. For hundreds of miles the Nazis destroyed the Soviets. Furthermore, the Nazi army was only one of the struggles faced. The city was already starving by the time the Nazis got there. But did not fall to the Nazi army and that was the turning point in the war. Though Grossman can't explain how this happened, he goes a long way by his depiction of "house 6/1" a barely standing building with a barely functioning group of soldiers lead by one the book's great characters Grekov. Day in and day out the Nazis attacked, bombed, and sniped and day in and day out the starving Russian soldiers fought back. There is something that compels us to fight on and sometimes that something is all we need.

The writing is beautiful throughout the novel and Grossman's images are complex and evocative, with singular events and pictures telling entire stories in and of themselves. For example:

'It's always the same. The solitary cell's occupied. He told us to keep it for people sentenced to death. If I put you there, what can I do with the fellow who's already there?'

Soon Krymov saw the firing-squad taking the man out to be executed. His fair hair clung to the narrow, scrawny nape of his neck. He could have been anything from twenty years old to thirty-five.

Krymov was then transferred to the solitary cell. In the semi-darkness he made out a pot on the table. Next to it he could feel a hare moulded from the soft inside of a loaf of bread. The condemned man must have just put it down--it was still soft. Only the hare's ears had time to grow stale.

and when Grossman is being more philosophical:

This universe inside a person has ceased to exist. This universe is astonishingly similar to the universe that exists outside people. It is astonishingly similar to the universes still reflected within the skulls of millions of living people. But still more astonishing is the fact that this universe has something in it that distinguished the sound of its ocean, the smell of its flowers, the rustle of its leaves, the hues of its granite and the sadness of its autumn fields both from those of every other universe that exists and has ever existed within people, and from those of the universe that exists eternally outside people. What constitutes the freedom, the soul of an individual life, is its uniqueness. The reflection of the universe in someone's consciousness is the foundation of his or her power, but life only becomes happiness, is only endowed with freedom and meaning when someone exists as a whole world that has never been repeated in all eternity. Only then can they experience the joy of freedom and kindness, finding in others what they have already found themselves.

and when Grossman is describing an environment:

The snow here hadn't thawed. Its large, rough crystals were filled with the blue of the lake-water. But on the sunny side of the hill the snow was beginning to melt. The ditch beside the path was full of gurgling water. The glitter of the snow, the water and the ice on the puddles was quite blinding. There was so much light, it was so intense, that they seemed to have to force their way through it. It disturbed them and got in their way; when they stepped on the thin film of ice over the puddles, it seemed to be light that was crunching under their feet, breaking up into thin, splinter-like rays. And it was light that was flowing down the ditch beside the path; where the path was blocked by stones, the light swelled up, foaming and gurgling. The spring sun seemed to be closer to the earth than ever. The air was cool and warm at the same time.

The officer felt as though his throat, which had been scorched by frost and vodka, which had been blackened by tobacco, dust, fumes and swear-words, had suddenly been rinsed clean by this blue light. Then they went into the forest, into the shade of the young pine trees. Here the snow hadn't melted at all. There were squirrels hard at work in the branches above; the icy surface of the snow was littered with gnawed fir-cones and flakes of wood.

The challenge of praising a work like Life and Fate is to put it in terms that both communicate the book's genius and avoid the hyperbole of book jacket blurbs. I can only hope the long quotes I've included make the case for the writing. Life and Fate manages to challenge everything we've assumed about WWII while maintaining a sense of comfort while reading, so that even as the greatest tragedies we've known are presented in raw and painful images, we never feel abandoned to them. Grossman is there to lead us through to an understanding that might some day prevent all of this from ever happening again. However, the best way to know if you'd like to read a book is to read the first paragraph or two to see if the prose connects with you:

There was a low mist. You could see the glare of headlamps reflected on the high-voltage cables beside the road.

It hadn't rained, but the ground was still wet with dew; the traffic-lights cast blurred red spots on the asphalt. You could sense the breath of the camp from miles away. Roads, railway tracks and cables all gradually converged on it. This was a world of straight lines; a grid of rectangles and parallelograms imposed on the autumn sky, on the mist and on the earth itself.

There is cause for hope on many fronts these days and author Ann Patchett (Bel Canto and Run) has beautifully articulated one of these in an article in the Wall Street Journal. Just a couple of highlights: the number of people reading fiction is on the rise for the first time in more than 25 years; the most heartening rise is in the 18-to-24-year old group (Harry Potter babies); and as a source of entertainment reading ranks somewhere between cheap and free. Reading a book allows us to step outside of ourselves for a moment and that can't be a bad thing.
Posted by Ellen at 6:00 PM No comments:

The holidays have kept us away from the blog for a few weeks, but I have had the chance to pull together some literary links.

First up, I found this link on Bookdwarf, a good literary blog run by a buyer for the Harvard Bookstore, to a listing of the most anticipated books of 2009. It's a great list and a lot to look forward to.

Clayton Eshelman is the pre-eminent translator of my favorite poet of all time, Cesar Vallejo. Bookslut (a book review site) has an interview with Eshelman about his work as a translator and his own poetry. The interview also includes an examination of a Vallejo poem. It's a cool interview and a good introduction to Vallejo.

Finally, with his new poetry collection My Index of Slightly Horrifying Knowledge, Paul Guest has quickly become one of my favorite living poets. He's up there with James Tate, Brian Turner, Kevin Young, and Noah Eli Gordon. (More on Paul Guest later.) He has a blog where he posts poems and writing.

Email ThisBlogThis!Share to TwitterShare to FacebookShare to Pinterest
Labels: links

PSB Presents: The Poet of the Month Series! 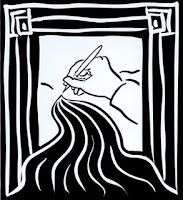 Hey, Guys! This February, Porter Square Books will be starting the Poet of the Month Series. Each month we'll be featuring a brand new poet along with a list of recommended readings.

This is our attempt at expressing gratitude for all the poets out there, past and present, who have worked tirelessly at rediscovering new paths of creative expression, while maintaining a deep sense of artistic integrity.

You can catch our Poet of the Month blog update at the beginning of every month, starting this February. We'll also be setting up a small, in-store display of the poet's work, along with a brief summary of the poet's life. Stay tuned and be sure to check it out!
Posted by E at 5:39 PM No comments: