For the most part, literature has made an uneasy transition onto the Internet. Generally, it is presented as if it were printed on a page, and though there is a different physical interaction, clicking the mouse instead of turning the page, the actual reading experience is no different online than on-paper. Furthermore, most attempts to merge the two media end up simply mashing them together, like hypertext poetry for example, rather than seeking out a new mode of expression that uses the best of both. The only thing that I've come across so far that comes close to a real new "online literature" are the Internet games, like the one we hosted for our Raw Shark Texts event last year, or the one based in the universe of, but not officially sanctioned by, the Matrix movies, where competitors follow clues through a number of different websites to solve some mystery. That is until I came across We Tell Stories.

We Tell Stories is a project of Penguin UK, where six short stories based on classic works are presented with the tools of the internet. The first installment is called "The 21 Steps" and is based on the novel The 39 Steps. The 21 Steps uses Google Earth to literally follow the protagonist around the UK. Wherever the protagonist goes on his adventure, the reader is taken there on the map. The prose is enclosed in the Google Map bubbles and includes additional pictures, audio, and video that augment the story. It is a seamless meshing of the two media into something entirely new. The second story "Slice" is based on The Haunted Doll's House and is told in two blogs (including the comments); one on LiveJournal and one through WordPress, with additional material available through Twitter and Flickr. The story started on March 25 and will end on March 28, but it will remain on their archive. What you see in both are all the hallmarks of literature with verbal images, characterization, plot, and interpretative potential and all the hallmarks of the internet with constant update, access to vast amounts of information, and (potentially simulated) reader interaction.

"Slice" will be followed by works based on Fairy Tales by Hans Christian Andersen, Therese Raquin by Emile Zola, Hard Times by Dickens, and Tales from the 1001 Nights. If the first two stories are any indication this is a project to watch for.

Email ThisBlogThis!Share to TwitterShare to FacebookShare to Pinterest
Labels: On the Web, What I'm Reading

One of the challenges of talking about books is expressing a deeply personal connection in a way that will convince a total stranger that the book is worth his or her time. It's the challenge every reviewer faces and it becomes more daunting when trying to explain a book that has a unique importance in your life. Given that, this article from Slate blew me away. What's so exciting about the article, and what made me special order the book immediately after reading the article, is that the work clearly inspired the writer to stretch the limits of his prose to do justice to a work of profound importance in his life. After describing the effect this work had on writers like Gabriel Garcia Marques, he says of Pedro Paramo, "it was like happening on a new primary color, entirely unlike any I'd seen before." Not just a new experience, or something unique and quirky, but a book that became a basic unit from which all his subsequent reading experiences would be composed.
Posted by Josh at 7:19 PM No comments:

Email ThisBlogThis!Share to TwitterShare to FacebookShare to Pinterest
Labels: On the Web 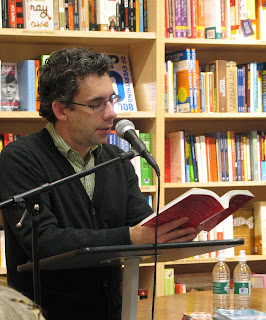 A good time was had by all when Grub Street and Porter Square Books brought Bret Anthony Johnston to the store. The audience was full of aspiring writers lapping up the wisdom being dispensed by Johnston who is Director of the Creative Writing Program at Harvard. Johnston's book, Naming the World: And Other Exercises for the Creative Writer, is an interactive writing book with contributions from over sixty writers. Johnston is also the author of Corpus Christi: Stories. If you missed him at the store you can still catch him at the Muse and the Marketplace, Grub Street's weekend-long literary conference happening April 26-27. 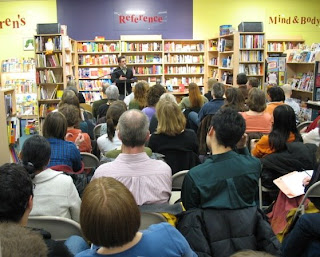 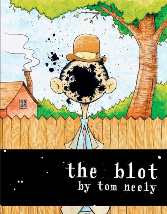 One of the most exciting debuts in graphic novels this year was The Blot by Tom Neely. Neely's first novel is the story of a character afflicted by a force made visible through ink blots on the page. Sometimes the blots are small and subtle. Sometimes they dominate the page or the panel. Sometimes the blot destroys and sometimes the blot creates. It's one of the strongest central images I've read in recent literature. The strength of a particular image, whether visually or verbally constructed, does not come from the clarity with which it conveys a particular idea, but from its ability to provide structure for whatever ideas are important to me as I read. An image like the blot can be anything, but when I read it, I saw the complexities of humanity's drive to create. Sometimes that drive is the only thing we have. Other times it pushes us to dangerous ambitions and foolish delusions. The drive to create helps us build relationships, but other times it drives us apart from each other. Other readers of The Blot will find other ideas for the blot to represent and I think that is a success. Neely guides us in the direction of this interpretation with a few subtle nods to one of the great images in American literature: Moby-Dick. Below are links to a recent interview with Tom Neely about The Blot and about his art in general.

It's been a Busy Year thus far and my new year's "resolution" to do even more reading in my "spare time" hasn't been going as well as I'd hoped. There are many books on my shelves at home that I'm eagerly anticipating...Here are 8 of them.
1. Working by Studs Terkel: When my brothers were in high school the drama club did a musical performance of Working. I was young at the time and can still remember some of the numbers, and as a twenty-something trying to decide on a career it seems like a good resource.

2. Darkmans by Nicola Barker: Josh has been raving about this at the book store and I do trust his taste (he encouraged me to read Raw Shark Texts by Steven Hall which I thoroughly enjoyed)

3. Dark Tide by Stephen Puleo: After we moved to the city I heard about "The great Boston molasses flood of 1919" and couldn't believe that molasses in January could be considered a disaster. This book is supposed to be the definitive account of everything that happened that January 1919.

4. Magic for Beginners by Kelly Link: In 2004 I went to a concert in Northampton and instead of having an opening band they had a reading. It wasn't until this past year that I found out that it was Kelly Link who had read from this book. She read the 6th segment of this book, a story about Zombies. It lulled us into a story- time sleepiness. There is nothing quite like being read to in a dark theater to let your mind wander and join the story.

5. As She Climbed Across the Table by Jonathan Lethem: Alexander put this on display a year ago February. I remember reading the back, being intrigued...forgetting the title, asking Alexander what it was and then finally taking it home before I could forget again. The idea of a particle physicist leaving her boyfriend for a void in the universe seems odd- but thoroughly entertaining.

6. No One Belongs Here More Than You by Miranda July (stories): Perhaps it was the bright yellow cover, the simplistic design (I know that this contradicts my previous post- forgive me). After reading a short story of July's in The Best American Non required Reading 2007 I was hooked!

7. The 13 1/2 lives of Captain Bluebear by Walter Moers: Perhaps I'm just attracted to bright yellow covers but this book has grabbed my eye several times over the past year and a half. It's described as being "equal parts J.K. Rowling, Douglas Adams and Shel Silverstein" and I really enjoy Mr. Adams' work.

8. Travels with Charley: in Search of America by John Steinbeck: I've been in search of road trip literature for the past year in preparation for my own road trip and this was suggested to me by a friend who went through the same process.

Are there any books you've been dying to have time to read?

Porter Square Books has been nominated for a Best of Boston Award from the Boston Phoenix. Click on the banner above to vote for us. Thanks for your support.
Posted by Josh at 11:16 AM No comments: