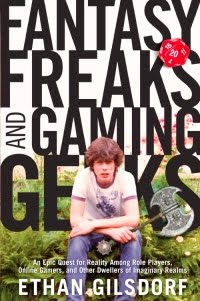 Ethan Gilsdorf is reading at the geek-eriffic event Nerdnite on Monday Aug 30 (that's "tonight" for most of you who read this Monday morning), at Middlesex Lounge in Cambridge, 8pm...more info below.
Consider this an off-site event for Porter Square Books --- any copies of his book Fantasy Freaks and Gaming Geeks that are sold actually belong to Porter Square ... so by coming, and buying, you're supporting your favorite indie bookshop.
This is the first event in the Fantasy Freaks and Gaming Geeks "Waiting for the Paperback" fall tour.

Why paperback? Glad you asked!

Talk 1: “Mind Control and Optogenetics: How We Learned to Stop
Worrying and Love the Virus”
By Azriel Ghadooshahy

Talk 2: “Tolkien, D&D, RPGs, MMOs and me: One geek’s personal journey
there and back again through fantasy and gaming subcultures.”
by Ethan Gilsdorf

Watch the Fantasy Freaks and Gaming Geeks video here:
Posted by Ethan at 10:45 PM No comments:

Got Mockingjay in your hand? Here's Suzanne Collins reading from the opening chapter.

Email ThisBlogThis!Share to TwitterShare to FacebookShare to Pinterest
Labels: Mockingjay

Saw this interesting article about experimental fiction on the Guardian a couple of weeks ago. It asks whether experimental fiction is on the rise and highlights a couple of my favorite authors, B. S. Johnson and Lydia Davis, as well as David Foster Wallace and David Mitchell. The article concludes with a cool list of three “experimental” writers the editors think are worth looking into and one of them is Cesar Aira, blogged about here, with a Millions article here and whose book Ghosts is a staff pick here. The article is a good read for anyway interested in the cutting edge of fiction.

So you’re looking for some humorous science fiction and fantasy but you’ve already read Terry Pratchett and Douglas Adams (if you haven’t, go read them now!) and you are wondering what to read now? Well, I have a few suggestions.

After you’ve caught up with the “classics” check out these authors and titles:

Agent to the Stars by John Scalzi tells the story of enlightened aliens who come to earth to share their wisdom and fabulous technology. Unfortunately, humanity finds them extremely ugly and very stinky. So they hire a Hollywood agent. Good, B-movie fun.

Robert Rankin is the very British author of a blimp-full of far-fetched satirical adventures combining occultism, steampunk, and running gags. Some of his best are Knees Up Mother Earth, Retromancer, and Toyminator.

Night of the Living Trekkies by Kevin David Anderson and published by those monster-lovers at Quirk Books is a zombie/Star Trek fandom mashup. “It’s a zombie book, captain, but not as we know it.”

And speaking of zombies, Married with Zombies by Jesse Petersen presents the story of a couple on the edge of divorce who find their love rekindled by the burning cinders of civilization. To be published on August 31, this little book delivers not just laughs and gore but helpful advice for lovers who find the magic gone from their relationship (and replaced by hoards of hungry undead).

A. Lee Martinez is the author of eight humorous novels including Gil’s All Fright Diner (a werewolf and a vampire team up to defend a very strange restaurant from zombies); The Automatic Detective (a doomsday robot turned private investigator battles mutants, green gangsters, and talking gorillas to save Empire City); and Divine Misfortune (shopping for a personal god goes very wrong).
Posted by Matthew at 3:48 PM 1 comment:

Calling all Suzanne Collins' fans though I'm sure you are already gathering together in anticipation of next Tuesday's release of Mockingjay, the final book in the trilogy. The book will be available here at 7am on Tuesday, August 24th. Join us for activities, refreshments, prizes and OF COURSE books!! Festivities will continue until about noon but books will be here...well, until they're gone!
Posted by Ellen at 4:01 PM No comments: 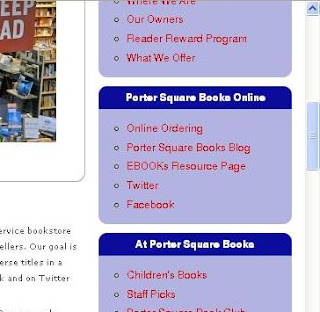 We’ve just unveiled the new Porter Square Books Online menu on our website. Through it you can connect to us on Facebook and Twitter, and learn more about ordering books online. The big new addition to the website is our revamped and expanded EBOOKs Resources page that includes an FAQ, detailed instructions of how to purchase an eBook from Porter Square Books, information about ereading software and hardware (including info about the Sony Reader, the iPad, and convertible tablets), and a list of a few books that really take advantage of some of the potential of eBooks.

To celebrate this new section, we’re having a sale on eBooks. For the month of August all eBooks will be 20% off. If you have any questions or comments about the new web pages and/or eBooks in general, feel free to email Josh at josh@portersquarebooks.com.