Interview with Steven Moore on The Novel: An Alternative History Volume 2 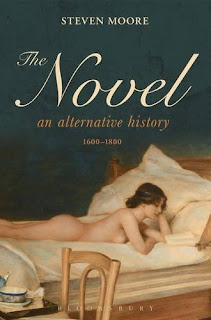 With the first volume of The Novel: An Alternative History, critic Steven Moore made a bold statement, that our understanding of the history of the novel was grossly myopic; that “the novel” is far older, far stranger, far more chaotic; and, at least to my way of thinking, far more fun than is traditionally believed. Starting with ancient Egypt and ending just before Don Quixote, Moore began the long and difficult task of proving that today’s “experimental” writers are as “traditional” as any author writing linear, realistic novels, but following a different current in the river of literature. Check out our interview with him about Volume 1 here.  Volume 2 (which I personally have been impatiently waiting for) picks up where most people would have started Volume 1, with Don Quixote and brings us up to 1800, about the time when “the novel” as so many understand it, began to solidify. Below is an interview with Steven Moore.

Several things: one is the movement toward interiority. In the premodern novels I wrote about in volume 1, we mostly watch the characters act, as on a stage. Occasionally we’re told what they are thinking, but the emphasis is on their public selves. After about 1600, there’s more emphasis on characters’ private selves, their thoughts and memories, ostentatiously so in Sterne’s Tristram Shandy (1759-67), and comically so in Xavier de Maistre’s Voyage around My Room (1794), which consists of a character confined a room for 42 days while his mind roams, like Proust in his cork-lined apartment.

Second is the growing self-consciousness about the novel genre. The novel was a loose, unfixed form before the Renaissance, without the kinds of rules and expectations critics and readers had for plays and poetry, so novelists did whatever they felt like. But as the novel coalesced into a recognizable genre, and as critics (first in China, then in Europe) began arguing about what a novel should be, you begin seeing novelists split into two camps: those who follow the rules and write commercial fiction for the masses, and those who continued to make their own rules and write for the literati—two camps that continue to this day.

What is the hardest part about writing about books very few people have read?

Providing enough of a plot summary so that my remarks on a novel’s achievement would make sense. I’ve been criticized for those summaries, but I couldn’t see any way of avoiding them. It struck me as potentially confusing and unhelpful to discuss character X’s psychological development without first explaining her situation, or the structural or linguistic innovations of novel Y without first telling what it’s about. So I tried to critique the novels as I summarized them, but apparently with too much of the latter for some readers.

Convince a reluctant or intimidated reader to read Tristram Shandy.

First, it’s one of the most influential novels of the 18th century; far from being an eccentric anomaly, it more or less created modern fiction, so if you don’t know the novel, your sense of the historical development of the genre is flawed. Second, it’s one of the warmest and funniest novels of that century, the most modern-sounding (even hip), and the most life-affirming. Like Infinite Jest—which employs the same “anticonfluential” structure (Wallace’s word)--it may seem long and forbidding at first, but if you relax and stick with it, it should win you over.

Is there a critic or work or idea that you think is the source of our conservative attitude towards the novel? If there wasn’t something or someone in particular driving this belief, what cultural (or commercial) forces created this attitude?

I shouldn’t single out Samuel Johnson, but he spoke for many back then when he said a novel should essentially be a conduct book, a straightforward narrative intended for less educated readers that dramatized the right way to live. (That’s why he hated Tom Jones and Tristram Shandy.) He and other early-modern critics felt the novel should be a pedagogical tool for young people, not a work of art for adults, an attitude you see today when conservative parents try to get a novel removed from a school’s library or curriculum. Conservatives like Johnson felt the novel should set standards for young readers, not question or mock those standards, or complicate matters with ambiguity and irony. Among the cultural and commercial forces are the rise of the circulating library in the 18th century and growing literacy among the middle and lower classes, most of whom preferred commercial fiction, an appetite profit-minded publishers were happy to feed. There’s never been much of a market for avant-garde fiction, needless to say.

Do you think critical and popular attitudes about playfulness and experimentation in novels is changing? For example, Jennifer Egan’s absolutely brilliant A Visit from the Goon Squad is told out of order, includes a chapter in PowerPoint, and won the Pulitzer Prize.

Oh absolutely. Over the course of literary history, you can watch as techniques introduced by avant-garde writers like Sterne (and criticized at the time) are gradually added to the working novelist’s toolkit.
One of the biggest barriers between most people and the weird, challenging, difficult, but ultimately rewarding novels you study, is simply the absence of critical reading skills; skills that are absent not from lack of ability, but because, for whatever reason, they didn’t learn them in the course of their education. Can you describe your reading process? How do you critique a work? If we could crawl into your mind and watch you read, what would we see?

Most discussions of novels at the high-school and undergraduate levels focus on the moral dilemmas of literary characters, as though discussing the lives of real people. The focus is on what an author seems to be saying, not on how it’s said. The latter is what interests me: I couldn’t care less what a novel is about, I’m interested in its style, technique, form—the things that make a novel a work of art rather than just a story about some people. As I read a novel, I watch to see how a novelist stages a scene, pay close attention to figurative language, allusions, the formal juxtaposition of episodes, and especially for any incongruities between a novel’s ostensible theme and the way it is played out. A fascinating example of this is Samuel Richardson’s huge novel Clarissa (1748): he set out to portray an ideal Christian woman, but wound up exposing her as an inhuman prig in a number of ways: by way of juxtaposing her stilted language with the lively style of her seducer, Lovelace; by giving two contrasting accounts of certain episodes, like the one where Lovelace sort of cops a feel while rescuing Clarissa from a fire—no big deal in his mind, but tantamount to rape in hers—which exposes Clarissa as near-psychotic; by dropping hints she’s a man-hating lesbian; and by portraying her “martyrdom” (she starves herself to death after her seduction) in the most revolting language imaginable instead of glorifying it. Here, I don’t think Richardson was aware of the mixed messages he was sending out, unless he’s cleverer than he appears, but more accomplished writers do such things deliberately, and that’s what critics watch for. It’s like looking at a painting of a horse: some focus only on the horse, but a critic like me would focus on the brush-strokes, the lighting, the positioning of the horse in the picture, whatever’s in the background, artistic antecedents, any innovations, etc.

If you were writing a volume that brought us through the 20th century, what are a few books you would include? Are there any you’ve encountered that you believe capture some of the currents in 19th and 20th century experimental novels?

I’d include some philosophical works that have all the field-markings of fiction, like Kierkegaard’s Either/Or, Carlyle’s Sartor Resartus, and Nietzsche’s Thus Spoke Zarathustra, along with eccentric novels like E. T. A. Hoffmann’s Tomcat Murr, Flaubert’s Temptation of St. Anthony, Robert Southey’s The Doctor—too many to name here. On pages 813-15 of my new book I have a huge list of titles that carried on the innovative, subversive tradition of Tristram Shandy. The dominance of the great 19th-century classics has obscured any number of interesting experiments in fiction.

What’s next for Steven Moore?

To be honest, this last book left me exhausted, intellectually and physically, so I don’t know what, if anything, is next.

What are you reading now?

I’m catching up on all the recent fiction I didn’t have time for while writing my two-volume history, plus whatever new pops up. I scored galleys to Pynchon’s newest, which I loved. I finished Marisha Pessl’s Night Film, which disappointed me but (like Egan’s novel) makes interesting use of visual media. Just started Camilo José Cela’s Christ versus Arizona—which consists of a single, 261-page sentence—and next up I think is Murakami’s 1Q84. Just reading at random, a nice break from reading programmatically for so many years.
Posted by Josh at 11:50 AM 1 comment:

Monday was Labor Day so I was thinking about work. Since I was at a bookstore, I was thinking about work and books and reading, so I asked people on Twitter to name some books that were hard work, but worth the effort. These books are hard work because they’re long, because their content is emotionally difficult, because they have a million characters to keep track of (who then get killed right after you finally remember who they are) and/or they are written in a style that takes some getting used to, but all of them are worth the effort. (Not a bad book club suggestion list either.)

The Caine Mutiny by Herman Wouk

A Song of Ice and Fire by George R.R. Martin

Lord of the Rings by J R R Tolkien

The Flame Alphabet by Ben Marcus

Oryx and Crake by Margaret Atwood

The Magic Mountain by Thomas Mann

Palace of the Peacock by Wilson Harris

The Three Musketeers by Alexandre Dumas

The Hunchback of Notre Dame by Victor Hugo

The Scarlet Letter by Nathaniel Hawthorne

Darkmans by Nicola Barker
Posted by Josh at 5:40 PM No comments: