Despite the mainstream narrative, I’ve never thought of books and ebooks as an either/or relationship. They both have strengths and weaknesses, both appeal to different types of readers and, quite often, different reading situations. What is exciting about ebooks is they open the possibility for new types of books, new readers, and new situations. For example, we’re starting to see a good number of in-between lengths being published as e-books; novellas, long-form journalism, long-short stories, supplemental material; works and content that, for whatever reason have found limited success in print. Here are a few examples of this new kind of longer, shorter, in-between ebooks.

Lucretia and the Kroons: This digital only is a novella that acts as a kind of prequel for Victor LaValle’s most recent novel, The Devil in Silver. It’s obvious why this story wasn’t included in the novel. Even though it’s protagonist, Lucretia, is a major character in The Devil in Silver, the story is set several years before the events of the novel and deals with many different, though somewhat overlapping, themes. It never would have fit in the longer form, but it’s a really good story and deserved to see the light of day. Ebooks present a great opportunity for authors and publishers to bring out some of the other stories, notes, drafts, materials, journals, etc that go into writing a book. Some authors and some projects could produce a print book along with any number of secondary ebooks.

Epic Fail: No matter how professional or thorough or scholarly a magazine or journal is there are still going to be limits on the length of articles or essays. And some ideas or topics, no matter how thoroughly explored, won’t support a book length work. E-books, like this one from the literary website The Millions (one of the best reasons to venture out onto the Internet if you ask me), explores our fascination with terrible art. For the past couple of years, Byliner (the publisher of this particular ebook) has been bringing out long form non-fiction and I think we’re just beginning to find ways for e-books to make it easier and more convenient for long essays and other not-quite-book-length non-fiction to find readers.

Playbook 2012 Series from Politico: The political website Politico, published a series of ebooks taking an in-depth and in-progress look at the 2012 election. Starting November 2011 The Right Fights Back, Inside the Circus: Romney, Santorum and the GOP Primary, Obama’s Last Stand, and The End of the Line: Romney vs Obama: The 34 Days that Decided the Election, marked a breakthrough in journalism. As with other non-fiction, ebooks allow journalists to publish pieces too long for conventional periodicals but too short for books. I hope in the future, to see ebooks used for the long, multi-article investigative journalism that has been so important to our society, but has been fading from our newspapers, magazines and news broadcasts because of the prohibitive cost. By collecting and publishing an investigative series as an ebook, newspapers and magazines could find an additional revenue stream to fund these vital ventures.

(And since we’re talking about ebooks, I’ll remind you that Kobo Minis are just $59.99 through February 14th.) 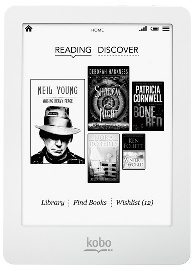 Someone not get the hint last month? Got some holiday cash burning a hole in your pocket? Just now hearing about the whole Kobo reader thing? If you missed the holiday Kobo Mini sales for whatever reason, you are in luck. From January 25-February 14 (and yes, there are many, many people who think an ereader that supports a local independent bookstore is a very romantic Valentine’s Day gift) Kobo Minis, bought either in store or online will be $59.99. That's $20 off the regular price. WiFi, dictionary, highlighting, translation Sudoku, built-in ebook store; the Mini really is a fantastic little reading device and an even better value at this price.
Posted by Josh at 6:01 PM No comments:

It's Winter- Time for That Slow Cooker

So it's cold out, and you got a slow cooker as a holiday gift- or you have a trusty veteran slow cooker and need some new recipes to try out. We have a great selection of slow-cooker cookbooks to add some spice and variety to your everyday dining.

The Fix it and Forget Cookbook, by Dawn J. Ranck it is the classic. If you just got a slow cooker, this may be the first cookbook you should buy. It has all your family's favorites.

The Better Home and Gardens Year-Round Slow Cooker is packed with recipes for more than just cold winter nights. It boasts 500 recipes "for all seasons," so you're sure to use this cookbook throughout the year.

The Mexican Slow Cooker, by Deborah Schneider, is a great book with recipes for moles, carnitas, enchiladas and more. What's better on a cold night than a spicy soup?

The Mediterranean Slow Cooker, by Michele Scicolone, has favorites from Italy, Greece, Morocco, Turkey, France and more. It may be the slow-cooker book with the greatest variety of cuisines!

The Indian Slow Cooker, by Anupy Singla, adapts aloo gobi, kaala chana and more to your slow-cooking kitchen in a compact volume with beautiful photographs and simple instructions.

The French Slow Cooker, also by Michele Scicolone, has all your favorite French stews and soups as well as a lovely array of desserts for your dining pleasure.

The Vegan Slow Cooker, by Kathy Hester, is a great addition to the repertoire of vegetable eaters. It's not just about meat and more meat as this terrific cookbook shows.

Diabetic Living's Diabetic Slow Cooker Recipes adapts popular dishes for healthy living. It would be a good choice for anyone trying to cook and eat healthier meals.

There you go! I hope you can find something- or a few things- to suit your palate and help you get the most use out of your kitchen!

Posted by Marie Cloutier at 8:46 AM No comments: 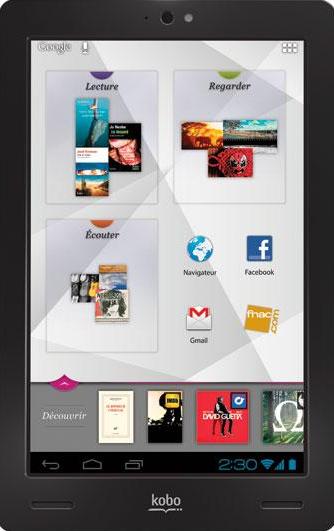 We are now selling Kobo Arc’s, Kobo’s new Android 4.0 tablet in 16G, 32G, and 64G models. (Click on the model link for full specs or to place an order.) The Arc is an open Android OS with full access to Google Play, a 1.5GHZ Dual Core Processor, 1GB of RAM, WiFi, a 1.3 megapixel forward facing camera, and a 7” HD display. Its Tapestries interface allows you to easily organize all of your content, it stores all of your ebooks in the cloud so you can access them on any device, and you can stream content to your TV with an adapter. Of the tablets at a comparable price, the Nexus 7 and the Kindle Fire, the Arc stacks up quite well. It has the fastest processor, a higher ppi screen than the Kindle Fire and more colors than the Nexus 7, and has the most flexible interface allowing you to customize your experience and multi-task. Here is a very thorough review of the Arc from across the pond. Click to visit Kobo’s Arc page and here for all the devices we offer.