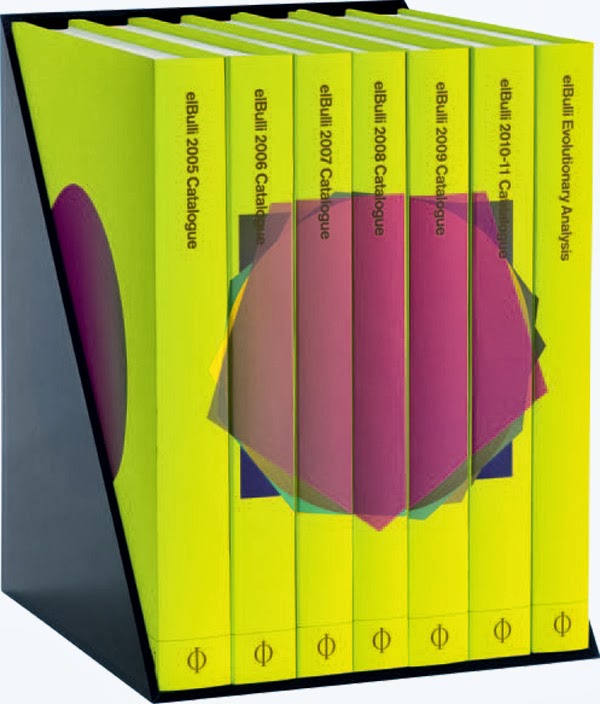 It is hard to describe to someone who doesn’t know, just how amazing elBulli 2005-2011 is. For years, elBulli was changing not just the way we prepare food, but the way we think of it. Its chef, Ferran Adria, showed us that we could use food as creatively and intelligently as artists use paint and writers use words. Both of the previous books to come out of Adria’s mind, A Day at elBulli and A Family Meal were wonderful, beautiful food books; the former an examination of the entire creative process and a book I recommend to artists and the latter an actual applicable cookbook that allows you to bring a taste of the greatest chef in the world into your own home. (Quick sample: 1. grate chocolate on to a piece of toast while it’s still warm. 2. drizzle with a little extra virgin olive oil 3. recover from your mind being blown)

Those of us who follow elBulli, whether in those books or The Sorcerer’s Apprentices, an excellent book about working there, or in the various TV shows and specials Adria appeared in, know there is another book. For six years, like a scientist in a lab or an obsessive writer at her journal, Adria recorded every single recipe they ever made.

2,720 pages spread over seven volumes with 1,400 images. The first six volumes record the recipes of each of the six years organized into six sections: Cocktails, Snacks, Tapas, Pre desserts, Desserts, and Morphings. Volume Seven is titled “Evolutionary Analysis,” and charts the philosophy, experiments, styles, and ingredients chronicled in the preceding volumes. It hasn’t even come out yet and I think it’s safe to say that it is the most important “cookbook” of the 21st century to date. You could probably read it as you would an art catalog or even an epic poem told in food you imagine.

At $625, in seven volumes, in hardcover, with a slipcase and so many pictures, weighing in at 40 lbs this book will have limited availability. It’s not for everybody, but if it’s for you, I highly, highly recommend pre-ordering a copy. Stores, in general, will be reluctant to carry more than one or two on the shelves and once those sell out, printing more will be very difficult. If you have any questions, feel free to give us a call at 617-491-2220 or send an email to info@portersquarebooks.com.

If you’re interested, but not ready to commit, along with the other books mentioned, I recommend taking this free online course offered by edX of Harvard that was designed by Adria. It features some of the greatest chefs in the world guiding you through their various techniques. You don’t have to do the homework or even watch the lessons in order to get a lot out of it, and exploring will give you a good sense of just how much you personally can get out of elBulli 2005-2011.

Our Most Anticipated of 2014

Every year The Millions does two Most Anticipated Books of the Year posts and it is one of the best bookish posts anybody does about anything. They touch on the big names, they find the hidden gems, and they organize it by month of publication. There is something so invigorating about knowing that all of these great books are still ahead of us. If you are a reader, it is not to be missed. But it also can be a bit daunting. They list dozens of books, all of which sound amazing. (And they’ve only done half the year so far!) So instead of sharing everything, I’ve picked one book a month through June as my most anticipated, all of which are available for pre-order so you can get them the day they are released.

Silence Once Begun by Jesse Ball. This one is scheduled for release in late January so I made it my February staff pick and nominated it for the IndieNext list. Jesse Ball is one of my favorite living writers and continues to baffle and amaze. In Silence Once Begun, an innocent man gambles his way into confessing to a mysterious crime. He is arrested and convicted, and yet remains almost completely silent through his whole trial and incarceration. The narrator is a journalist who interviews the man’s family and friends in an effort to understand his own deteriorating marriage. And in the end...well...what I love about Ball’s work is how slippery it is, how hard to hold it is, how mysterious it can be, even after (or especially after) you’ve finished it. Silence Once Begun is his first hardcover release and I hope it will be his break out novel.

Bark by Lorri Moore. I know. This is an obvious choice, but it is an obvious choice for a reason. If you look back through the history of the American short story, there are a few defining writers whose stories fundamentally changed how we write and read short stories and Moore is one of them. And this is her first short story collection since Birds of America, which, if you can believe it, came out fifteen years ago!

Every Day Is for the Thief by Teju Cole. Open City, his first novel, was thoughtful and cerebral; both interior and exterior; and, challenging yet accessible. I really like to recommend it to teenagers reading at a more sophisticated level; younger minds in the early stages of developing an intellectual sensibility. Every Day is for the Thief seems like it’s going to take a similar meditative approach to a different setting and set of experiences. Now that we know what to expect from Cole, I’m excited to see where he takes his unique literary voice.

Can’t and Won’t by Lydia Davis. Speaking of “a few defining writers whose stories fundamentally changed how we write and read short stories” Lydia Davis’s new collection is my most anticipated book coming out in April. Honestly, she has been writing innovative, experimental, philosophical, and beautiful stories and poems for decades... and she’s translated Flaubert... and Proust. She should really have streets named after her in cities across the country. This is her first collection since the release of her Collected Stories in 2010 (which is on your bookshelf next to the complete Flannery O’Connor, Elizabeth Bishop, and Emily Dickinson, right?). I can’t wait to find out where she has gone and what she has found since then.

Faces in the Crowd by Valeria Luiselli. Get used to hearing me talk about this book. I’ve nominated it for the IndieNext list and will make it a staff pick when it comes out. Faces in the Crowd is a subtle, sophisticated examination of identity, authenticity, and poetry. The narrator, a young married writer and mother of two, shares the struggle of writing a novel about an obscure Mexican poet and the time in her life when she became obsessed with said obscure Mexican poet. Luiselli braids these narrative currents into a brilliant meditation on the nature of creation. Translation hoax. Ghosts on the subway. The demonstrative vocabulary of a clever toddler. The mix of fact and fiction on the page and in the mind. With her first novel, Luiselli has established herself as a brilliant explorer of voice, self, and art. I read this for the Indies Introduce Debut Authors panel I was on last summer and have been dying to put it in readers' hands ever since.

My New Friend is So Fun by Mo Willems. OK, this one probably seems a little out of character, but honestly, I read every single Elephant and Piggie as soon as it comes in. They’re charming and funny without being saccharine. They’re simple and accessible without talking down to children and they deal with the real world joys and anxieties children (and booksellers) face. And, Willems even wrote a fantastic metafiction Elephant & Piggie. And now, it looks like Willems will be turning something of a corner in this installment. So, yes, though there are a ton of fantastic books coming out in June, every new Elephant & Piggie is a little dollop of joy so it’s the book I’m most anticipating for June.

Look for the second half of the year later in the Spring. Feel free to share what you’re looking forward to in the comments. (And seriously, check out The Millions list.)