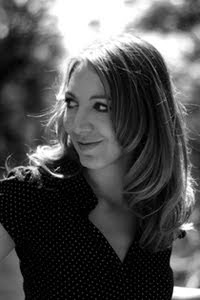 Karyna McGlynn is the author of two chapbooks Scorpionica and Alabama Steve. Her poems have appeared in Fence, Gulf Coast, Willow Springs, Indiana Review, Denver Quarterly, CutBank, and Ninth Letter. She edits the online journal linelinelineline. Her latest book I Have to Go Back to 1994 and Kill a Girl won the 2008 Kathryn A. Morton Prize in Poetry. Dark, funny, edgy; this is a thrilling new collection of poetry, that plays with narrative, diction, and structure to produce vibrant and exciting poems. Lynn Emmanuel says “I Have to Go Back to 1994 and Kill a Girl is a remarkable book. It is innovative, original, unprecedented, and, at the same time, its originality and innovation are predicated on a passionate, even obsessive relationship with the past." Below is an interview with Karyna.

As a writer, and an editor of a literary magazine, how would you describe the state of American poetry?


Overwhelming. But also very exciting. When people start to bemoan the state of American poetry or start all that “poetry is dead” nonsense, I tell them to go talk to Bob Hass for five minutes. He’s quick to remind us that there is now more poetry being published and sold than any other time in history. And if you don’t believe him, just go look at the poetry section in any decent bookstore: it’s huge. And it’s got a lot more to it beyond the ubiquitous Shakespeare and Maya Angelou collections. I’m particularly dazzled by the array of work coming out from all the small/indie/micro presses like Ugly Duckling, Wave , Black Ocean , Cinematheque, Write Bloody, Dusie , Caketrain, etc. The only problem is that there’s more interesting stuff being published than I can possibly read, but that’s a good dilemma for poetry to have.


In a number of poems, especially "Would You Like Me to Walk Your Baby?" there is an almost malicious sexuality. With so many sexual taboos broken in art, literature, music, the internet, etc, what is left of human sexuality for writers to explore? Are there aspects of sexuality that poetry is best equipped to investigate?

While I wasn’t attempting to break any sexual taboos in the book—at least not intentionally—I do think that sexuality is a powerful source of inspiration for many artists, and that poetry is particularly adept at exploring the non-rational, the mysterious, the sensory and the subjective. It’s ridiculous to say we’ve “seen it all.” We’re not done with having sex, why would we be done talking about it? Sincerity excites me more than cynicism—even when it verges on cliché. Readers have tended to focus on my book’s “malicious sexuality,” but I feel it represents only one of the many childhood/adolescent fears I was exploring. I wanted to write a book that scared me: my early impressions of sexuality and danger were part of that.


A number of your poems, such as "I Have to Go Back to 1994 to Kill A Girl," use an atypical arrangement of the words on the page. When you encounter a poem like that by someone else, how do you read the white space? Is there a way to tell whether that space is substantive or not?


I became fascinated with white space after a writing mentor told me that my poetry was “like chocolate cake” but that I was “stingy with the milk.” Regardless of whether this is (or was) true, I began utilizing the white space of the page in an attempt to provide the reader more breathing room—or, “milk”—in otherwise dense hunks of sensory imagery.


Most of us recognize the importance of the line and stanza break. But what about a poem’s negative space? I think it’s integral, not incidental to the way we read the text. White space can corset, fragment, frame, slow down, speed up, or suspend a poem. It can provide a sense of erasure, amnesia, ambiguity, rest, symmetry and silence. If the white space of a poem does any of these things in a way that feels essential to my understanding and or appreciation of the poem’s content, then I read the space as substantive.


Your poems have a complexity of diction, logic, and grammar that I find exciting, especially since so much contemporary poetry seems to fetishize simplicity. How would you define a "complex poem" and a "simple poem?" Are there ideas, emotions, or events that are best expressed by one or the other? Are these descriptions even useful in reading and understanding poetry?


I’m not sure I’m capable of defining “complex” or “simple” poetry. There are many contemporary poems that I might describe as minimalist in their use of language or image, but these poems are rarely simple—their spareness often leaves more work for the reader to do. I suppose there are poems that are narratively straightforward with seemingly little for the reader to untangle, but the best of these are deceptive in their simplicity; they bloom under the lens of a close-reading, gradually revealing their ambiguities and multivalances.


I often think about the density/complexity of a poem’s shell in relation to its innards. Imagine four different types of candy: a milk chocolate with a nut-cluster on the inside (i.e. “the open secret”—a poem that is initially accessible, but proves surprisingly complex or “chewy” as you enter deeper into it), a Cadbury egg (i.e. a poem that is difficult or chewy on the surface—often employing complex diction, language, rhetoric—but which is easy to interpret or understand once the reader gets past the initial barrier), an Everlasting Gobstopper (i.e. a poem which is neither immediately accessible nor forthcoming with its secrets upon further probing, but which provides layer upon layer of enjoyment even though you can never sink your teeth into it or swallow it whole), and, finally, a marshmallow (i.e. a poem that is both lisable on its surface and forthright in its message or meaning—easy to consume and enjoy). This is certainly a personal and imperfect taxonomy, and there is no implied hierarchy here; I’m not even sure how I would categorize most of my poems, but I do know that there is a constant tension between the baroque and the blunt in my work. For instance, I’m working on a book-length poem that’s ornate and anachronistic, but I also co-edit a journal that’s enamored with short, candid, pop-cultural poetry. I find the tug-o-war fascinating, but it isn’t very fashionable. I love the ornamental diction of Hopkins’ “It will flame out, like shining from shook foil” as much as the plain speech of Wright’s” “I have wasted my life.

What do you think is the basic unit of poetry: the word, the line, the poem, the collection, something else? What is it possible for a work of poetry to be "made" of?


I’m not a linguist, but it’s an interesting question. I’m not sure if we can determine what the basic unit of poetry is unless we know what we’re building: a brick? A wall? A room? A skyscraper? They’re nesting subsets. I’m inclined to say that the basic unit of poetry is the word, and often think of Coleridge’s definitions of prose and poetry: “prose,—words in their best order; poetry,—the best words in their best order.” However, we can’t overlook the “best order” part of the equation. We quote lines from poems, not single words. It’s the lines that are transportable and unique—these make meaning. Many people have a strong vocabulary, but the syntax is where the art comes in. A poem needs to do or make something, even if it’s a still life or a meditative piece. So, in this sense perhaps the basic unit of poetry is the verb—not just the literal unit of speech but the impetus behind the poem—what makes it go.


Despite having a devoted following, in terms of the general reading public, poetry isn't very popular. Why do you think so many more people read (or at least buy) prose than poetry?


There are so many reasons for this I hardly know where to begin. For one, I think people are suspicious of poetry, and especially those who call themselves poets. “Writer” is a profession; “poet” is a delusional and grandiose-sounding claim. One of the problems is that poetry is associated with confession and feelings. I think a lot of people see the act of writing poetry as self-indulgent or hubristic—something that should be abandoned after the angst-ridden teenage years, or at least relegated to private notebooks. How else can we explain the reluctance of so many poets to tell people what they do?


And then there’s the circular argument: poetry isn’t very popular because it isn’t very popular. As the novel rose to prominence, poetry sunk into relative obscurity. It’s not that people don’t like poetry anymore—it’s just that they’re not exposed it. My neighbor Jim—an avid reader who admittedly doesn’t read poetry—told me that he “wouldn’t even know where to find good poetry. Where would I even look? Who would I ask?” I see his point. If our parents don’t read poetry, and if our English teachers avoid teaching poetry (which is frequently the case), and if we don’t know anybody who’s part of the poetry subculture, what madness would entice us to seek it out on our own?


Another neighbor, Diane, told me that she loves poetry, but that she mostly buys novels because she uses her reading time as an escape—she wants to get lost in somebody else’s story without the pressure of having to “figure out what a poem means.” Even narrative poems, she claims, require more work on the reader’s part and aren’t generally as satisfying as a novel because they’re not long enough. These are common complaints against poetry in a time where the novel is King. Poetry is to the novel what an artsy, low-budget short film is to a feature-length Hollywood blockbuster. I find it interesting, however—given our culture’s decreased attention span and addiction to YouTube videos, tweets and text messages—that poetry isn’t more popular than it is. I can only speculate that while many poems are short, they’re still seen as “too difficult” or “depressing” to be consumed on a mass scale. That’s not an entirely an unfair bias. I’ve been reading and writing poetry my whole life, but even I get frustrated with the impenetrability, whininess, and pomposity of some contemporary poetry. This is when I reach for poets like Matthew Dickman, Chelsey Minnis and Jennifer L. Knox. They remind me that poetry can be fun.

If you had the chance to give the world a reading assignment of one poem, what poem would you pick?


One of mine! No, I kid. This is a hard question, and at the risk of sounding “woo-woo” I’m going to say Keats’ “Ode to a Nightingale” because it is a poem that consistently brings me to the point of tears without ever exhausting itself. Not only is it one of the most beautiful poems in the English language, it is also one of the most satisfying to unpack. For a poem that feels so heartbreakingly personal, its themes are universal: our mortality, our spirituality, our relationship with art and creation. I find new levels of meaning and enjoyment every time I read it. But readers don’t have to be super-duper into the “eternality of what’s represented in art” or “negative capability” in order to enjoy Keats; the sensual surface of his poems alone is more than enough to recommend them, and “Ode to a Nightingale” in particular is the poem that keeps on giving! On a different day I might have said Knox’s “Hot Ass Poem”—if only because it unseats the aforementioned notion that poetry is difficult, depressing and boring.


What are you reading now?